Keeping you informed regarding all financial matters 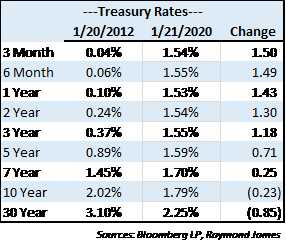 Domestic interest rates 10 years and out have moved very little in actual figures over the last 8 years. As a matter of fact, the 10-year Treasury is only 23bp lower today than it was on January 21, 2012. By comparison, the 2-year and 3-month Treasuries have moved more than 6 times as much and in the opposite direction being 130bp and 150bp higher than on the same date of comparison. It is all relative though.

With general interest rate levels historically low, even small rate movements can reflect relatively high percentage changes. The U.S. yield curve has started 2020 by flattening rather significantly on a percentage basis. Whether you prefer to look at the 3-month Bill to 10-year Treasury or the 2- to 10-year Treasury spread, both have flattened significantly year-to-date. The 3mo vs. 10yr flattened by 37% and the 2yr vs. 10yr flattened by 28%. The average spread over the last 30 years is 170.6bp (3mo/10yr) and 119.4bp (2yr/10yr). We currently stand at 23bp and 25bp respectively. 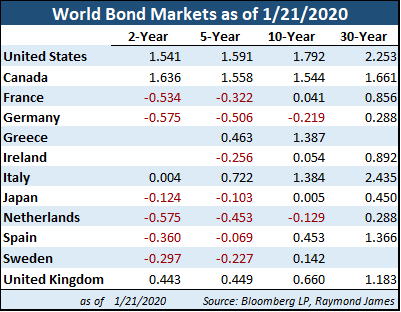 The U.S. dwarfs most world economies. The 2nd largest economy in the world, China, is 36% smaller than the U.S. as measured by GDP. The state of California, if it were its own country, would be the 5th largest economy in the world. The U.S. is blessed to boast over 23% of the entire world’s GDP. The considerable extent of this difference means that the U.S. economy is able to withstand and thus mitigate other world financial market shifts. As Europe and Asia have struggled with slowing economies and negative interest rates, the U.S. has crawled along with modest growth and surprisingly high relative yields.

The Treasury curve has historically been a worthy gauge on economic conditions. The curve is telling us that interest rates may stay low for some time while inflation remains humbly in check. Mind the directional move of the curve and be sure to keep appropriate asset allocations. Remember that for many investors, fixed income assets are designed to preserve wealth. Be careful getting caught up or greedy with record equity levels and allow disproportionate asset allocations especially when the Treasury curve is revealing signs of caution. Disciplined asset allocation is essential under all market conditions.

The author of this material is a Trader in the Fixed Income Department of Raymond James & Associates (RJA), and is not an Analyst. Any opinions expressed may differ from opinions expressed by other departments of RJA, including our Equity Research Department, and are subject to change without notice. The data and information contained herein was obtained from sources considered to be reliable, but RJA does not guarantee its accuracy and/or completeness. Neither the information nor any opinions expressed constitute a solicitation for the purchase or sale of any security referred to herein. This material may include analysis of sectors, securities and/or derivatives that RJA may have positions, long or short, held proprietarily. RJA or its affiliates may execute transactions which may not be consistent with the report’s conclusions. RJA may also have performed investment banking services for the issuers of such securities. Investors should discuss the risks inherent in bonds with their Raymond James Financial Advisor. Risks include, but are not limited to, changes in interest rates, liquidity, credit quality, volatility, and duration. Past performance is no assurance of future results.